The Properties of White Tea: Dietary and Health Benefits 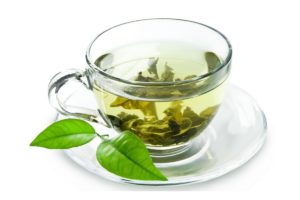 Whether it is green tea, Oolong tea, Pu-erh tea, or white tea, each of these teas has been traditionally known to have unique beneficial health properties. As more and more scientific research is conducted into these effects, it is becoming clear that these teas may possess numerous properties that make them beneficial to human health.
This report will take a detailed look at the known health and dietary benefits that are associated with white tea; it will also discuss the concept of synergy, whereby the effectiveness of different teas are combined together to maximize the full potential benefits.

White tea has been traditionally produced in Fujian province on the south-east coast of China. While all the other types of tea produced from the tea plant (Camellia Sinensis) are brewed from tea leaves, white tea is produced from the leaves as well as buds of the plant.

In fact, the tea has acquired its name from the silvery downy hairs on the buds of the tea plant. Selection of white tea leaves is very stringent as only small and young leaves are suitable for the tea.

White tea is very lightly oxidized, and the buds and leaves are allowed to wither in natural sunlight before light steaming. Further processing is avoided in order to prevent more oxidization of the tea.

For instance, white tea also contains a high amount of polyphenols, which are plant based anti-oxidants. Several studies have shown that polyphenols are responsible for a number of important health benefits.

These anti-oxidants are linked to a reduction in the level of cholesterol. Catechins which are anti-oxidants belonging to this category are known to keep arteries healthy by preventing the build-up of plaque on the endothelial lining of arteries.

Polyphenols have been linked to reducing cholesterol, keeping the circulatory system healthy and improving circulation. This helps in keeping blood pressure down and improving cardio vascular health.

Polyphenols attack harmful free radicals in the body and studies have found a link between these anti-oxidants and anti-cancer action. A 2010 study links white tea extract consumption with suppressive action on cancer cells.

White tea is also found to inhibit the growth of bacterial infections.

A study conducted in 2004 at Pace University, New York, found that white tea extract may have prophylactic applications as it was found to have anti-bacterial properties that retarded the growth of streptococcus infections, staphylococcus infections, pneumonia as well as dental infections. It was also found to have anti-fungal and anti-viral properties. White tea extract was found to totally inactivate Saccharomyces cerevisiae yeast cells and Penicillium spores. The study concluded that the anti-fungal and anti-bacterial properties of white tea may be greater than green tea.

Studies have also found that polyphenols present in white tea may boost immunity by increasing the level of regulatory T cells in the body.
Studies have also shown that these anti-oxidants can have anti-ageing action, by keeping connective tissue healthy and maintaining the health of skin and eyes. Indeed, in China tea has been known to be an agent of youth and health.

A study undertaken in 2009 at Kingston University, London, found that white tea consumption could lower the risk of rheumatoid arthritis, certain cancers, as well as heart disease due to its strong anti-inflammatory and anti-oxidant properties and its ability to keep connective tissue healthy.
The study also found that white tea prevented or slowed down the breakdown of collagen and elastin caused by enzymes, resulting in anti-ageing effects. 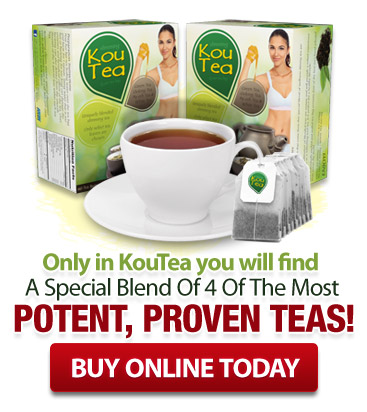 Only in KouTea™ You will find a special blend of 4 the most potent, proven Teas!

Obesity is a growing concern today, especially in post industrialized nations. The rising incidence of obesity and related conditions such as cardio vascular problems and diabetes has made the issue very relevant.

The potential effects of white tea on fat storage and weight gain have attracted the interest of scientists worldwide. Several studies have and are being conducted on these effects in order to understand the full extent to which white tea may aid in weight loss, and the results do look very promising.

White tea has been found to aid weight loss in various ways. Polyphenols present in white tea help lower the levels of cholesterol in the blood, as well as improve the circulatory system. A healthy heart is the first step to maintaining healthy weight through good diet and regular exercise.

White tea may also prevent the storage of fat in the body, and help metabolize fat quicker. It is also found that white tea can suppress appetite, making it easier to follow a healthy diet.

The study by a German health food company in 2009 found that Chinese white tea reduces growth of new fat cells and broke down the fat contained in existing cells.

White tea contains caffeine and is a naturally thermogenic substance. This means that it helps speed up the metabolism. By boosting metabolism, white tea can help increase the rate at which stored fat is burnt.

While white tea speeds up the metabolic breakdown of calories, it does not contain any calories, making it effective in weight loss. Also, unlike other teas which also contain caffeine, white tea contains a very small amount, making it free from the unpleasant side effects of caffeine consumption.

White tea is known to dull the appetite, making it easier to refrain from snacking between meals. This can make it much easier to stick to a healthy weight loss diet.

While all teas derived from the Camellia Sinensis (tea) plant have the same basic components and nutrients, each tea also has its own character, developed due to the way the tea is produced and processed. Even within white tea, for instance, the amount of polyphenols can vary based on the processing, the strain of the tea plant etc.
Green tea, Oolong tea, Pu-erh tea and white tea all have their own strengths and weaknesses when it comes to weight loss. However, several studies have shown that all these types of tea can be effective in combating weight gain and obesity.

For instance, while green tea has been shown to be particularly effective in reducing the amount of fat stored in the body, Pu-erh tea has properties that impact the digestive system and improve the efficiency of digesting tough fats. White tea has been shown to suppress the growth of new fat cells and help the breakdown of existing fats.

Thus using different types of tea together in the right combinations can help create an effective weight loss regime that heightens the benefits of each tea, while overcoming any weaknesses. This can be done by consuming a blend of teas designed specially to heighten the weight loss effects of each tea, or by taking a health supplement consisting of the right blend of tea extracts.

Side Effects of White Tea

White tea is a completely natural substance, as it has been derived from the tea plant and minimally processed. It contains a very small amount of caffeine, so there are known to be no real side effects for white tea. However, in order to avoid adverse interaction with any existing medication, it is important to seek medical advice before taking any health supplements and products made from concentrated white tea extract.

White tea is a minimally processed tea traditionally produced in the south-east of China. Being derived from the tea plant, white tea shares many of its health benefits with other teas such as Oolong and green tea.

The polyphenols present in white tea are beneficial to health in a number of ways. They can help keep the circulatory system healthy and improve cardio vascular health. Studies show that they also play a preventative role in heart disease and other cardio vascular conditions such as stroke. Polyphenols have the ability to lower bad LDL cholesterol, and prevent the build-up of plaque on the lining of arteries.

In the light of the global obesity epidemic, white tea has become especially interesting to researchers owing to its potential benefits for weight loss.
A 2008 study showed that white tea may have an anti-obesity effect on human fat cells. The study found that white tea has the ability to suppress the expression of genes that cause the generation of new fat cells. Not only this, white tea also brings about the breakdown of existing fat cells.

By speeding up metabolism, white tea can help increase the rate of fat oxidation. It also has an effect of suppressing hunger, making it a very effective component of any weight loss regime.

Although different teas derived from the Camellia Sinensis plant have similar base properties, each tea also seems to have its own unique properties as well. For instance, while white tea is found to cause the breakdown of fats, Pu-erh tea is found to have a degreasing effect and help in getting rid of certain types of fat.

Consuming different teas together as part of a regime can be the most effective way to use them in weight loss. This concept is known as synergy, where different teas can be used together to overcome any individual weaknesses and maximize their strengths.