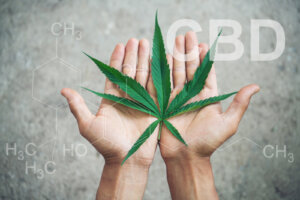 The use of cannabidiol (CBD) oil to treat pain, anxiety, depression, and many other conditions has become increasingly popular in recent years.

An extract of the indica or sativa strands found in cannabis, CBD is just one of over 100 chemicals in the plant. But while certain chemicals in cannabis, such as tetrahydrocannabinol (THC), produce the ‘high’ effect which is synonymous with marijuana, CBD itself does not have any psychoactive side effects.

This quality alone has led to its wider use by people wanting to treat pain and other symptoms, seeing to its rising popularity in the world of health and wellness. A plethora of products are now available including CBD vapes, CBD bath bombs, and super-strength CBD drops in various flavors.

As a relatively new practice, currently there have been very few clinical studies on its usage. But, from the studies that have been conducted, we know of at least four possible benefits of using CBD.

After a number of early animal trials showed positive results in treating mood disorders, a 2019 study in Brazil saw equally promising findings.
Given either CBD oil or a placebo prior to a public-speaking event, of the 57 men that participated in the study, those that had taken 300mg of CBD generally became less anxious.

This had led to researchers suggesting that CBD could be an effective way to treat anxiety, with a further study having successful results when treating young people suffering with anxiety due to PTSD.

Another potential benefit of using CBD is that it could be used to reduce pain and inflammation. While marijuana has been used to treat pain for thousands of years, it is only recently that scientific studies have supported its usage.

A 2020 study on people with peripheral neuropathy in the legs found that using CBD oil had a greater effect than a placebo over a four-week timeframe. And though the study may have used a small sample size of just 29, those that received the 250mg dosage of CBD reported a reduction in both intense and sharp pain as well as less cold and itchy sensations. Besides, no participants reported any side effects.

Effecting 9% of the population, acne is a common skin condition caused by a number of factors including the overproduction of sebum in the sebaceous glands.
One study found that the anti-inflammatory properties in CBD oil could prevent these glands from producing the excessive oily substance that contributes to the development of acne.

Another potential benefit of using CBD is that it could have positive effects on treating patients suffering from two rare forms of epilepsy.
In 2018, the U.S Food and Drug Administration (FDA) approved the use of the first CBD-based medicine when it made Epidiolex available upon prescription.
After taking part in thorough research, a study concluded that the drug could potentially reduce the number of seizures suffered from people with Lennox-Gastrault or Dravet syndrome.

As the use of CBD is becoming increasingly popular year upon year, its list of potential benefits is also growing. While people using CBD products for different reasons, including to relieve pain, reduce anxiety and treat acne, we still require greater medical research to support the limited number of studies that have already taken place.
But the evidence suggests that the number of people using CBD for medicinal purposes will only increase in the years to come.