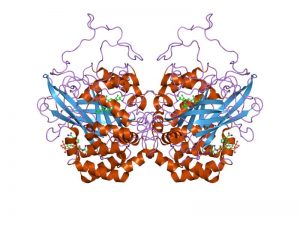 Catalase is a common enzyme found in nearly all living organisms exposed to oxygen (such as bacteria, plants, and animals). It catalyzes the decomposition of hydrogen peroxide to water and oxygen. It is a very important enzyme in protecting the cell from oxidative damage by reactive oxygen species (ROS). Likewise, catalase has one of the highest turnover numbers of all enzymes; one catalase molecule can convert millions of hydrogen peroxide molecules to water and oxygen each second.

Catalase is a tetramer of four polypeptide chains, each over 500 amino acids long. It contains four iron-containing heme groups that allow the enzyme to react with the hydrogen peroxide. The optimum pH for human catalase is approximately 7, and has a fairly broad maximum: the rate of reaction does not change appreciably between pH 6.8 and 7.5. The pH optimum for other catalases varies between 4 and 11 depending on the species. The optimum temperature also varies by species.