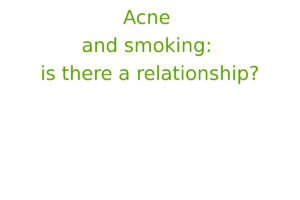 A questionnaire on smoking habits was offered to 350 patients with acne vulgaris and 350 patients suffering from skin diseases other than acne, aged 15 – 40 years, attending in a skin clinic in Tehran, Iran. The patients completed the questionnaires anonymously in the waiting room.

An association between acne and cigarette smoking was not found in this study.

Acne vulgaris is a common, chronic inflammatory disease of pilosebaceous follicles. Several factors have been suggested to influence acne including diet, menstruation, sweating, UV radiation, stress, and occupation[1]. Although some studies have shown that cigarette smoking aggravate acne[2][3], others did not confirm this association[4], or even showed a protective effect[5]. Therefore this study was undertaken to evaluate the relationship between acne vulgaris and cigarette smoking.

Three hundred and fifty patients with acne vulgaris and a similar number of patients with skin diseases other than acne, aged 15 – 40 years, attending in a skin clinic in Tehran, Iran were asked to complete a questionnaire on smoking habits anonymously in the waiting room. Acne was diagnosed on a clinical basis by the presence of either of comedones, papules, pustules, nodules or cysts but those with only acne scars and no active lesions were not included.

Current smoking was defined as smoking at least one cigarette in a week. All data were analyzed with the SPSS for windows (release 11.5).

The amount and duration of smoking in acne and control patients

We could not find any association between acne and smoking in this study. Although patients with acne were less likely to smoke, but this association was not present after adjustment for sex. The patients included in this study had a wide age range (i.e., 15 to 40 years). As a consequence we could not separate factors associated with acne onset from changes in personal habits occurred during the course of the disease.

Mills for the first time studied the association between acne and smoking[5]. He studied 156 patients with acne through a questionnaire on smoking habits and found that 19.7% of 96 male and 12.1% of female patients were smokers, which was significantly less than national statistics (34.5% and 32.7%, respectively). So he suggested that some component of cigarette, possibly nicotine, has an anti-inflammatory action on acne. We compared the acne patients with patients with other skin diseases attending the same clinic in the same time period, and believe that they are more suitable as a control group that national statistics. Also Mills studied patients with severe acne under treatment with isotretinoin, whereas this study included patients with all forms of acne.

Jemec et al[4] studied the prevalence of acne and the smoking habits of a random sample of 186 15- to 22-year-old subjects and found that 40.7% of men and 23.8% of women had clinical acne but smoking was not significantly associated with acne (odds ratio: 0.54, 95% confidence interval: 0.17–1.78). Although we used a different approach, a case-control design, reached a similar conclusion.

Smoking has been associated with several adverse effects on the skin[6]. But protective effects of smoking against certain inflammatory diseases, such as ulcerative colitis[7], acne rosacea[8], pemphigus vulgaris[9], and recurrent aphthous stomatitis[10] have also been reported. Available data do not support any association between acne vulgaris and smoking.

The author(s) declare that they have no competing interests.

AF participated in the design and conduct of the study and preparation of the manuscript.

RS participated in the design and statistical analysis of the study.

SMD participated in the design and conduct of the study.

MNK participated in the design and conduct of the study.

All authors read and approved the manuscript.