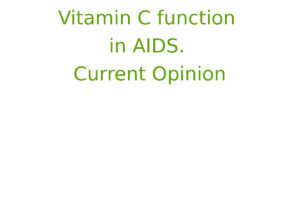 The seriousness of the AIDS epidemic may justify some speculation as to a possible means of therapy. Ascorbate in very large doses is certain to modify the course of the disease to some extent.

The spectrum of diseases that ascorbate is alleged to benefit is so wide as to immediately cause doubt. I wish to offer this short explanation as to why ascorbate has some effect on so many conditions.

I have described that the amount of ascorbic acid which can be tolerated orally by a patient without producing diarrhea increases somewhat proportionately to the toxicity of the disease[1][2]. Among the roughly 80% of persons who tolerate ascorbic acid very well, bowel tolerance will be reached when in excess of 10-15 g of ascorbic acid dissolved in water is taken in four to six divided doses per 24 hours. The astonishing finding was that when that same person is acutely ill with a mild cold, tolerance will increase perhaps to 50 g per 24 hours. A severe cold will increase tolerance to 100 g; an influenza, even up to 150 g; and mononucleosis or viral pneumonias, to as much as 200 g per 24 hours. These higher doses may have to be divided as frequently as hourly.

These large amounts of ascorbate are being drawn off the GI tract at a rate sufficient to prevent amounts from reaching the rectum and producing diarrhea. Measurements of ascorbate in urine, saliva, or serum indicate that if sufficient doses of ascorbate are not given when a patient is ill, the body levels of vitamin C drop rapidly. In such a case, there is not enough vitamin C left in the body to guarantee all the known housekeeping functions of the vitamin. Disorder of these functions, including several metabolic reactions necessary for proper functioning of the immune system are known to be dependent on vitamin C. I call this condition acute induced scurvy.

Note: This premiere free radical scavenger function has little to do with nutrition but is a pharmacologic effect of ascorbate when utilized in unnatural amounts for humans.

It is certain that AIDS causes this depletion. The sicker the patient is, the more ascorbate will be destroyed by the disease process. This depletion certainly contributes to the terminal events and probably plays a key role in the increased susceptibility of AIDS patients to various pathogens and the development of cancer.

A recent article describes the discovery of a suppressor factor in AIDS patients. This suppressor factor was found to be neutralized in the test tube by concentrations of ascorbate equivalent to 10-20 g of ascorbate a day in man. It was thought that this amount was “far too toxic” to use in humans and that a less toxic antioxidant should be found[3].

Actually, 10-20 g of ascorbate is easily tolerated and is not toxic. Unfortunately, the AIDS disease process will undoubtedly destroy large amounts of ascorbate and so the 10-20 g equivalent in the test tube will not be adequate in vivo. I estimate that the bowel tolerance in AIDS patients will be found to be from 30-200 g per 24 hours depending upon the stage of the disease. At least bowel tolerance doses should be utilized. It will be profitable in crisis situations such as Pneumocystis carinii pneumonia to utilize massive doses of sodium ascorbate intravenously. Sodium ascorbate (without preservatives) may be administered in concentrations of 60 g per liter. Three liters (180 g) of ascorbate per 24 hours would be my guess as to minimum dose to be tried in this situation.

Bowel tolerance can usually be enhanced by using a 50-50 mix of ascorbic acid and mineral ascorbates (a mixture of calcium, magnesium, and potassium ascorbate). This mixture allows even higher cellular levels of ascorbate to be achieved without diarrhea being produced.

If these oral solutions are used over a long period of time, care should be taken to keep them off the teeth by using a straw in order to avoid enamel damage. Sickle cell anemia and G-6-PD deficiencies should be ruled out where indicated.