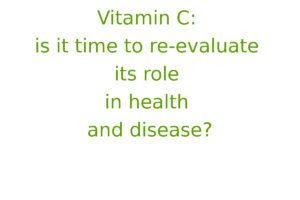 Vitamin C (VC; ascorbic acid, AA) is synthesised from glucose in the liver of most mammals, but not in humans. Synthetic AA supplementation is often necessary to prevent vitamin C deficiency. Intracellularly AA is reversibly oxidized to an ascorbic radical which converts into dehydroascorbic acid (DHA). Ascorbic acid crosses cell membranes with SVCT1, SVCT2 or GLUT1, GLUT3 and GLUT4 transporters. Recommended daily allowance for VC is around 75 mg/day for women and 90 mg/day for men. This seems to be too low in relation to real human body needs and does not ensure true health protection. There are ongoing studies re-evaluating the role of VC in cancer treatment. Therefore, it would be also appropriate to reassess its use as a specific drug in the prevention and therapy of asthma, allergic rhinitis and atopic dermatitis.

Until James Lind, an eighteenth century naval physician, recommended daily rations of lime or lemon juice to overcome ascorbic acid (AA) deficiency in the British Navy, thousands of sailors and voyagers had died during long-distance sea travels because of scurvy. Unfortunately, up to the beginning of the twentieth century there was no scientific proof that scurvy resulted from the lack of a specific nutrient and that it could be prevented or cured by appropriate dietary manipulation[1][2][3]. In 1928, Hungarian biochemist and Nobel Prize winner Albert Szent-Gyorgyi isolated and structurally characterised hexuronic acid. Four years later, in 1932, it was established that hexuronic acid and vitamin C (VC), a potent anti-scorbutic (Latin scorbutus, scurvy) factor were actually one and the same substance. A year later, Walter Norman Howarth synthesised crystalline AA, the most popular dietary nutriment throughout the world[1][2][4].

Vitamin C (C6H8O6; 2-oxo-L-threo-hexono-1,4-lacto­ne-­2,3-enediol) commonly referred to as ascorbic acid (AA)) is a six-carbon lactone synthesised from glucose in the liver of most mammals, but not some birds, guinea pigs, bats, apes and humans. These species lack the enzyme L-gulono-1, 4-lactone oxidase catalysing the conversion of L-gulonolactone into AA. Thus, humans are completely dependent on AA from fresh fruits, vegetables or synthetic VC[2][4][5].

Severe VC deficiency in human diet causes scurvy, a plague of ancient and medieval times. Low levels of AA in tissues and cells have been associated with anaemia, gingival bleeding, capillary haemorrhages, poor wound healing, atherosclerotic plaques, muscle degeneration or neurological disturbances[1][3][4]. Vitamin C deficiency lowers resistance to infections, inhibits the immune system, increases the risk of allergic sensitisation and negatively influences the clinical course of many chronic diseases[2][3][4][6]. To prevent deficiency in pregnancy, lactation, smokers and the elderly as well as during inflammatory, degenerative and oncological diseases, synthetic AA in the form of (effervescent and chewable) tablets, capsules, crystalline powder or liquid may be necessary[4][7][8].

Vitamin C as a water-soluble compound is readily available and easily absorbed but it is not stored in the body. Hence to maintain AA pool in the body, humans require VC in their diet. Citrus fruits, strawberries, raspberries, blueberries, cranberries, kiwi, mango, grapefruit, tomatoes, broccoli, Brussels sprouts, spinach, red and green peppers and other leafy vegetables (Table 1) are the major food sources of VC[3][4]. Human diet normally contains its two forms. Ascorbate or L-AA is the reduced compound. Dehydro­acorbic acid (DHA) chemically defined as threo-2,3-he­xodiulosonic acid-γ-lactone represents an oxidized form of VC. Ascorbate constitutes 80-90% of VC in the food; DHA in food varies from 10% to 20% of total VC[9][10][11].

When taken orally, plasma and tissue concentrations of VC are tightly controlled and strictly dependent on intestinal absorption, tissue accumulation and renal reabsorption[12].

In the gastrointestinal tract VC is absorbed via the buccal mucosa, stomach and small intestine. L-ascorbic acid is absorbed largely in the ileum and jejunum; oxidized DHA in the proximal intestine (duodenum and jejunum). Buccal absorption is mediated by passive diffusion. Gastrointestinal absorption occurs through active sodium-dependent, energy-requiring and carrier-mediated transport[10][13]. Dehydroacorbic acid enters epithelial cells through facilitated diffusion via sodium-independent glucose transporters. Then, on the internal side of the plasma membrane, DHA is rapidly recycled back to AA which prevents its efflux and allows the accumulation of ascorbate against a concentration gradient[10][14][15]. Ascorbic acid is readily absorbed from the intestine. The ab­sorption of dietary VC is nearly complete and inversely related to the dose ingested. At higher intakes it reaches the saturation point relatively quickly. Hence, to achieve the maximal gastrointestinal absorption, several doses smaller than 1000 mg, spaced throughout the day, are better than a single large dose[13][16]. Vitamin C absorbed in the digestive tract circuits mainly as unbound AA and is available as an anti-oxidant in the blood and interstitial fluids[3]. Intracellularly it is reversibly oxidized to an ascorbic radical (semidehydroascorbic acid – SDA) which donates the second electron converting into dehydroacorbic acid or dismutates into ascorbate and DHA[17][18][19]. In the cytosol SDA is reduced back to ascorbate by NADH-dependent semidehydroascorbate reductase or NADPH-dependent thioredoxin reductase. Circulating DHA is rapidly transported into leukocytes, erythrocytes and many insulin-sensitive tissues via glucose transporters. In the cells DHA is reduced back to ascorbate by the gluthatione-dependent enzyme, glutaredoxin or thioredoxin reductase[14][15][19][20]. If not recycled to ascorbate DHA it is irreversibly hydrolyzed to 2,3-diketogulonic acid (DKG) which does not function as an antioxidant. In humans, 2, 3 DKG is further converted to oxalate and threonate. In plants and animals synthesizing VC, DKG may be metabolized to xylose, xylonic acid and lynxonic acid. Oxalate in humans is considered a true metabolic “end product” because there is no evidence that tissues utilize it any further[4][14][19][21].

Gradient-driven transport of the oxidized, hexose-like dehydroascorbic acid is mediated by low-affinity, high-capacity sodium-independent glucose transporters particularly GLUT1, GLUT3 and GLUT4, with no affinity for AA and ascorbate[17][25][27]. In human erythrocytes the association of GLUT1 C-terminal peptide with stomatin, an integral erythrocyte membrane protein is responsible for the preferential uptake of DHA. Stomatin, a structural, cholesterol-binding protein is expressed at high levels with 100 000 molecules per cell. The number of the facilitative GLUT1 exceeds 200 000 molecules per cell[17][18][30].

Several mechanisms of AA efflux from various cells including enterocytes have been proposed but not yet firmly established. Volume-sensitive and Ca2+-dependent anion channels (VSOAC), gap-junction hemichannels, exocytosis of ascorbate-containing vesicles, glutamate-ascorbate hetero-exchange, ascorbate-ascorbate homo-exchange may play a role. It appears that at least in certain cells ascorbate efflux occurs through anion channel-mediated diffusion. This is the most plausible of all proposed pathways for ascorbate efflux[17][18][19].

In the kidney, AA is filtered from the glomerulal capillary bed into the Bowman’s capsule and reabsorbed in the proximal convoluted tubules with the participation of SVCT1 transporters[4][25][29]. At 500 mg and above daily dose, plasma concentration does not increase because VC cellular transporters are saturated and exaggerated urine excretion commences. The 500 mg and 1250 mg single doses of VC are entirely excreted in urine[13][23]. This mechanism explains its non-toxicity even in high doses. Potentially adverse effects do not occur < 1000 mg and only above this daily dose urine uric acid and oxalate levels increase[23]. In prospective observational studies, there was no relationship between excessive AA and kidney stone formation, pro-oxidant effects or excess iron absorption[32][33]. Ascorbic acid however is endogenously metabolized to oxalates which enhances the pool of oxalates in the human body. Oxalates are also excreted in urine if VC ingestion is excessive. Hence, in a genetically predisposed individual a high VC intake can increase the risk of calcium oxalate kidney stones[25][34].

The tolerable upper limit for VC based on gastrointestinal symptoms is estimated at 2000 mg/day. A higher intake may trigger mild nausea, vomiting or osmotic diarrhoea. They are however easily reversed within a week or two of reduced intake[2][3][35][36]. Chronic administration of large doses of VC may also adversely affect body iron reserve in hereditary hemochromatosis. In turn, patients with a glucose-6-phosphate dehydrogenase deficiency treated with high doses of intravenous VC are at risk of intravascular haemolysis[37][38].

The US Food and Nutrition Board of the Institute of Medicine established the Dietary Reference Intake (DRI) values for the US population in 1941[35]. It includes estimated average requirements (EAR), recommended dietary allowance (RDA) (average daily dietary intake level sufficient to meet the nutrient requirements of nearly all healthy individuals in a given group) and the tolerable upper intake level (TUL). Recommended dietary allowance and TUL for AA significantly depend on age and sex and increase in pregnancy, lactation, smokers and diseases associated with oxidative stress (Table 2)[32][33]. Currently VC RDA requirements differ between countries with the highest value (110 mg/day) in France[2][39]. In Poland, RDA is still 60-70 mg/day for both genders, whereas in the USA it is 75 mg/day for women and 90 mg/day for men. These RDA levels maintain a total body pool of AA of 1.2-2.0 γ and physiological plasma concentrations of 40-80 μM/l[15][17][36][40][41].

Modern farming methods have lowered VC levels in food. Humans consume cultivated plants with less VC than in wild variants[42][43]. Vitamin C is lost during storage and food processing. Light, oxygen exposure, oxidizing metals (Cu2+, Ag+, Fe3+) or high temperature negatively influence its content in raw fruits and vegetables. Boiling, steaming, freezing, canning also diminish its stability and concentration in foods[3][4]. Moreover, current RDA falls on the sigmoid part of the curve of VC pharmaco-kinetics, hence even small changes in intake produce large changes in plasma concentration. For this reason Levine et al. have claimed for many years that American RDA is too low in relation to real human needs and does not ensure true health protection. They postulate, based on current pharmacokinetic knowledge, that RDA for VC be re-evaluated and increased to a desirable daily dose of 200 mg[23][35][39].

Additionally, numerous studies have demonstrated that VC consumption higher than current RDA enhances the immune system, protects against oxidative DNA damage, decreases the risk of certain cancers and chronic diseases[2][13][35][36][44]. Therefore, based on evidence-based literature, humans should consume more than five servings of fruits and vegetables daily, with a 1000 mg VC supplementation split in 2 or 3 doses, in order to ensure optimal levels of VC[2][35].

There are ongoing studies re-evaluating the role of VC in cancer treatment. Therefore, it would be also appropriate to reassess its use as a specific drug in the prevention and therapy of asthma, allergic rhinitis and atopic dermatitis[6][45]. There are however a few caveats. It would be crucial to administer it intravenously to bypass the cellular and tissue mechanisms which tightly regulate its concentration when it is ingested orally. Moreover, these new therapeutic doses should be much higher than those used in previous studies, which have been found inconclusive in the recent Cochrane metanalysis[45][46]. Research on VC should be carried out rigorously in a double-blind, placebo-controlled fashion, in a large cohort of randomized patients and for a reasonably long period. Studies of high parenteral doses of VC in animal models of asthma and other allergic diseases are also desirable. Only methodologically robust research will form the basis for recognition of VC as an antiallergic and/or anti-oxidant drug reducing the mucosal and/or cutaneous inflammation. This would be an important step because of the widespread availability of VC in fruits and vegetables and lack of its toxic effects even in very high doses.

© 2012 Termedia Sp. z o. o. This is an Open Access article distributed under the terms of the Creative Commons Attribution – Non Commercial – Share Alike 4.0 International (CC BY-NC-SA 4.0) License (http://creativecommons.org/licenses/by-nc-sa/4.0/), allowing third parties to copy and redistribute the material in any medium or format and to remix, transform, and build upon the material, provided the original work is properly cited and states its license.