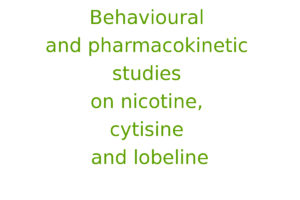 Previous work has suggested that cytisine and lobeline are of low potency in producing nicotine-like behavioural effects, despite having some nicotine-like peripheral effects and potently inhibiting the binding of tritiated nicotine to the brain of the rat.

Rats were trained to discriminate nicotine from saline in a two-bar operant conditioning procedure with food reinforcement. It was confirmed that cytisine had a nicotine-like discriminative effect, but it was much less potent than nicotine itself. Lobeline failed to produce a nicotine-like discriminative effect, even at doses that greatly reduced overall rates of responding. Neither drug attenuated discriminative responses to nicotine. The concentrations of drugs in plasma and brain were determined by HPLC in rats of the same sex, strain and age as those used in the behavioural experiments. The rank order of the ratios of concentrations in brain to plasma was lobeline > nicotine > cytisine, which was directly proportional to their lipophilicity determined by reversed-phase HPLC. Based on the concentrations in brain and known affinities for high-affinity nicotine binding sites, in vivo tests should show cytisine to be slightly more potent than nicotine and lobeline to have nicotinic effects in the doses used.

These predictions were not fulfilled and thus, the behavioural effects of cytisine and lobeline cannot be correlated with their effects at the binding site for tritiated nicotine. Since pharmacokinetic factors do not account for this discrepancy, a pharmacodynamic explanation will be necessary.