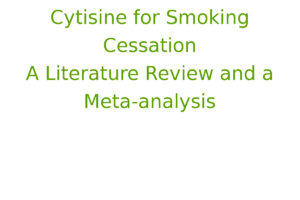 Cytisine is an agonist of nicotinic receptors; in particular, it binds strongly with α4β2 nicotinic receptors. Cytisine has been used to treat tobacco dependence for 40 years in Eastern Europe. The objective of this study was to review the literature on the effect of cytisine on smoking cessation.

Results  Ten studies reported the effects of cytisine on smoking cessation, including 4 controlled studies (3 placebo controlled). Nine studies used the Bulgarian drug Tabex, containing 1.5 mg of cytisine per tablet, and one Russian study used buccal films containing either 1.5 mg of cytisine or 0.75 mg of cytisine plus 0.75 mg of anabasine. All studies were published between 1967 and 2005 in Bulgaria, Germany, Poland, and Russia. There were 4404 smokers treated with cytisine and 3518 in control conditions. The pooled odds ratio after 3 to 8 weeks in the 3 placebo-controlled trials (2 were double blind and 1 was randomized) was 1.93 (95% confidence interval, 1.21-3.06). For the 2 placebo-controlled double-blind trials with a longer follow-up, the pooled odds ratio after 3 to 6 months was 1.83 (95% confidence interval, 1.12-2.99). One placebo-controlled double-blind trial had follow-up after 2 years (odds ratio, 1.77; 95% confidence interval, 1.29-2.43). Some adverse effects were reported. Most trials were, however, of poor quality.

Conclusions  Cytisine may be effective for smoking cessation. This fact remained largely unnoticed in the English-language literature.

Tobacco smoking is the first avoidable cause of deaths and morbidity in developed countries, yet available treatments for tobacco dependence are not very effective. Thus, new treatments are warranted. During World War II, the leaves of Cytisus laburnum (golden rain tree) were used by smokers as a tobacco substitute. A 1955 publication advised smoking C laburnum or Ulex europaeus, which both contain cytisine, as a treatment for tobacco dependence. Cytisine (not to be confused with cytosine) is an alkaloid found in all parts of C laburnum, particularly in its seeds. Like nicotine, cytisine is a natural insecticide. It has been used for decades as a smoking cessation drug in Eastern European countries. It is marketed for this purpose by a Bulgarian firm under the name of Tabex (information available at: http://www.tabex.net). Varenicline, a new and effective smoking cessation drug, was derived from cytisine. Cytisine has a molecular structure similar to that of nicotine and acetylcholine and it is an agonist of nicotinic receptors; in particular, cytisine has a high affinity for α4β2 nicotinic receptors. In 1978, the tobacco industry identified cytisine as the substance with the pharmacological action closest to that of nicotine. Because of its affinity to nicotinic receptors and its pharmacological similarities to nicotine, cytisine is being used as a starting material for the development of new drugs, and it is covered by several patents for its medical use.