Department of Pharmacology, University of Edinburgh 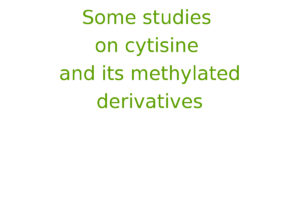 The surprising low oral toxicity of cytisine and nicotine may be ascribed to the method of administration; if the drug is placed directly in the stomach there is no possibility of absorption through buccal mucous membranes.

Cytisine and caulophylline may differ from nicotine in their central effects.

The introduction of the second methyl group to form the quaternary salt does not appear to cause a dramatic change in the conformation of the molecule. Caulophylline methiodide appears to be feebly active because it has feeble affinity.