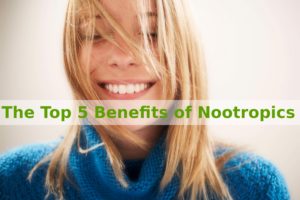 With the promise of improved brain functions like memory retention, focus, and attention spans, nootropics offer countless benefits to students, working professionals, and others alike. And while some still worry about the potential side-effects of drugs, nootropics promise safety with little to no negative effects, making them a perfect choice for virtually anyone.

If you’ve been considering a nootropic stack to enhance your day-to-day functioning, you should also understand the full range of benefits you stand to gain by doing so. Below, we’re discussing the top 5 benefits of nootropics to give you just a small glimpse of the benefits, both cognitive and otherwise, you stand to gain.

The 7 Types of Nootropics

The 7 Types of Nootropics

Each type of nootropic stands distinct from the rest and while some have been around for decades since the initial discovery of nootropics, others are relatively new and were released only years ago. The seven types of nootropics include: Natural/Herbal, Racetams, Cholines, Peptides, Vitamin B Derivatives, Ampakines, and Smart Drugs.

Creating Your Perfect Stack Will Deliver These Benefits and More

When you want to access the full range of benefits nootropics have to offer, creating your own stack, or combination of various nootropics, can help you achieve just that. This means you will be able to enjoy the benefits above, as well as others you find unique to your own body and issues.

With these benefits and more, it’s simple to see why more and more people are turning to nootropics to intensify focus, improve memory, and to protect brain health, especially as they age. And when you want to do the same, all you have to do is begin your own nootropics regimen (trust us, you’ll be glad you did!).

“The Top 5 Benefits of Nootropics”