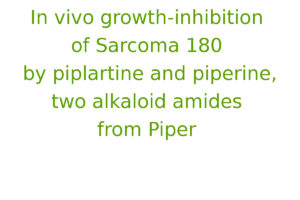 Both have been reported to show cytotoxic activity towards several tumor cell lines. In the present study, the in vivo antitumor activity of these compounds was evaluated in 60 female Swiss mice (N = 10 per group) transplanted with Sarcoma 180. Histopathological and morphological analyses of the tumor and the organs, including liver, spleen, and kidney, were performed in order to evaluate the toxicological aspects of the treatment with these amides. Administration of piplartine or piperine (50 or 100 mg kg-1 day-1 intraperitoneally for 7 days starting 1 day after inoculation) inhibited solid tumor development in mice transplanted with Sarcoma 180 cells. The inhibition rates were 28.7 and 52.3% for piplartine and 55.1 and 56.8% for piperine, after 7 days of treatment, at the lower and higher doses, respectively. The antitumor activity of piplartine was related to inhibition of the tumor proliferation rate, as observed by reduction of Ki67 staining, a nuclear antigen associated with G1, S, G2, and M cell cycle phases, in tumors from treated animals. However, piperine did not inhibit cell proliferation as observed in Ki67 immunohistochemical analysis. Histopathological analysis of liver and kidney showed that both organs were reversibly affected by piplartine and piperine treatment, but in a different way. Piperine was more toxic to the liver, leading to ballooning degeneration of hepatocytes, accompanied by microvesicular steatosis in some areas, than piplartine which, in turn, was more toxic to the kidney, leading to discrete hydropic changes of the proximal tubular and glomerular epithelium and tubular hemorrhage in treated animals.

Modern man is confronted with an increasing incidence of cancer and cancer deaths annually. Statistics indicate that men are largely plagued by lung, colon, rectal, and prostrate cancer, while women increasingly suffer from breast, colon, rectal, and stomach cancer[1]. The literature indicates that many natural products are available as chemoprotective agents against commonly occurring cancer types[2].

In addition to their use as spices, Piper species (Piperaceae) are important plants in traditional medicine. In particular, they are useful against asthma, bronchitis, fever, hemorrhoidal afflictions, gastrointestinal diseases, and rheumatism[3]. The preparations obtained from plants belonging to the genus Piper have shown anti-inflammatory, antifeedant, insecticidal, and anti-hypertensive activities, as well as inhibitory activity of aflatoxin B DNA binding and anticancer activity[3]. Many investigators have emphasized that the phytochemicals isolated from spices such as pepper species are potent biological agents with interesting anticancer properties[4].

Piplartine and piperine are alkaloid-amide components obtained from Piper species. Several of them have been reported to show cytotoxic activity towards tumor cell lines[5]. Piperine has been reported to display central nervous system depressant, antipyretic, analgesic, and anti-inflammatory activities[3]. Piperine also protects against chemical carcinogen-induced genotoxicity[6]. Moreover, piperine is a potent inhibitor of the mixed function oxygenase system and of p450 isoenzymes[7]. Piperine has been reported to inhibit the in vitro and in vivo production of nitric oxide and tumor necrosis factor-a[8], and to inhibit lung metastasis[9]. Pradeep and Kuttan[10] demonstrated that piperine is also a potent inhibitor of nuclear factor-kß (NF-kß) and proinflammatory cytokine gene expression in B16F-10 melanoma cells, which, according to these investigators, could explain its anti-metastatic activity. Sunila and Kuttan[11] also demonstrated piperine’s immunomodulatory and antitumor activities.

Piplartine, on the other hand, has been much less studied. Its in vitro antiproliferative activity was demonstrated using tumor cell lines[12][13][14]. Recently, Bezerra et al.[14] compared the antimitotic activity of piperine and piplartine in different cell systems, e.g., in cultured tumor cells and sea urchin embryos, and concluded that piplartine was more potent.

In the present study, we evaluated the antitumor activity of piplartine and piperine in mice transplanted with Sarcoma 180. Histopathological and morphological analyses of the tumor and the organs, including liver, spleen and kidney were performed in order to evaluate the toxicological aspects of the treatment with these amides. 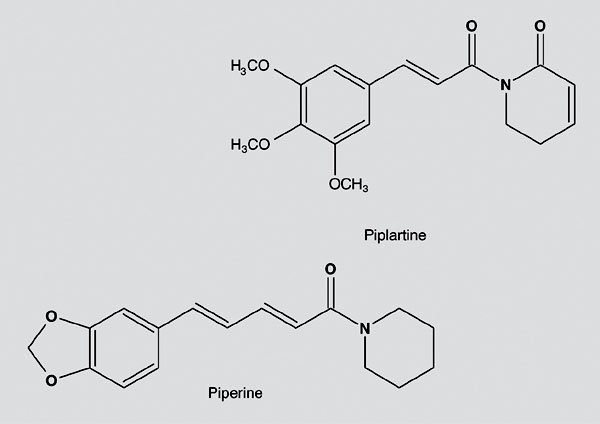 Sixty female Swiss mice weighing 20-30 g, obtained from the central animal house of the Federal University of Ceará, Brazil, were used. Animals were housed in cages with free access to food and water. All animals were maintained under a 12-h light-dark cycle (lights on at 6:00 am).

Sarcoma 180 tumor cells were maintained in the peritoneal cavities of mice from the same animal house. Ten-day-old Sarcoma 180 ascites tumor cells (2 x 106 cells/500 µL) were implanted subcutaneously into the left hind groin of the experimental mice. One day after inoculation, piperine and piplartine (50 and 100 mg/kg) or 5-fluorouracil (5-FU, 25 mg/kg) were dissolved in 10% DMSO and administered intraperitoneally for 7 days. The negative control was injected with 10% DMSO. On day 8, the mice were sacrificed and tumors, livers, spleens, and kidneys were excised, weighed and fixed in 10% formaldehyde. The inhibition ratio (%) was calculated by the following formula: inhibition ratio (%) = [(A – B)/A] x 100, where A is the average tumor weight of the negative control, and B is the tumor weight of the treated group.

After fixation in formaldehyde, tumors, livers, spleens, and kidneys were grossly examined for size or color changes and hemorrhage. Then, portions of the tumor, liver, spleen, and kidney were cut into small pieces, followed by staining with hematoxylin and eosin of the histological sections. Histological analyses were performed by light microscopy, with priority given to recognizing the extent of liver or kidney lesions attributable to the drugs.

Tumor sections were deparaffinized with xylene and dehydrated with ethanol. The slides were then immersed in water for 10 min. For antigen retrieval, the slides were boiled in citrate buffer, pH 6.0, for 15 min in a microwave oven and subsequently cooled for 20 min. Next, the slides were washed in TBS and endogenous peroxidase was blocked with 0.3% hydrogen peroxide for 15 min. After washing with TBS, the sections were incubated overnight at 4ºC with mouse antibodies to Ki67 at 1:50 concentration. After 24 h, the slides were washed and incubated with a multilink antibody for 20 min, washed in TBS and incubated for 20 min with the avidin-biotin-peroxidase complex. After washing with TBS, the slides were incubated for 3 min with diaminobenzidine, and finally counter-stained with hematoxylin prior to mounting. The percentage of proliferating neoplastic cells was evaluated directly by light microscopy. To quantify the amount of proliferation, all Ki67-positive cells were counted in 4-6 random fields per slide.

Data are reported as mean ± SEM. The differences between experimental groups were compared by ANOVA followed by the Student-Newman-Keuls test, with the level of significance set at P < 0.05.

After treatment with piperine (100 mg kg-1 day-1) and 5-FU (25 mg kg-1 day-1), the spleen weights were significantly reduced (P < 0.05), while piplartine treatment did not induce any change in the organs’ weight (Table 1). Histopathological analysis of the kidneys from treated animals showed discrete hydropic changes of the proximal tubular epithelium and glomerular and tubular hemorrhage, but the glomerular structure was essentially preserved. The alterations seemed to be more intense in animals treated with piplartine. In addition to the effects observed in the kidneys, the histopathological analyses indicated that the liver was also a target organ for piperine and piplartine toxicity, with the effects of piperine being more intense than those of piplartine. These effects included Kupffer cell hyperplasia, portal tracts and centrolobular venous congestion, focal infiltrate of chronic inflammatory cells, intense ballooning degeneration of hepatocytes, microvesicular steatosis, and sinusoidal hemorrhage. However, in the presence of piplartine, no areas of steatosis were observed.

Histopathological analysis of the tumors excised from control mice showed groups of large, round and polygonal cells, with pleomorphic shapes, hyperchromatic nuclei and binucleation. Several degrees of cellular and nuclear pleomorphism were seen. Mitosis, muscle invasion and coagulation necrosis were also noticed. In the tumors excised from animals treated with 5-FU, piperine and piplartine, extensive areas of coagulative necrosis were observed.

Ki67 staining for cell proliferation was performed in the tumors removed on day 8 from untreated animals and from animals treated with 5-FU (25 mg kg-1 day-1), piperine and piplartine (100 mg kg-1 day-1). Figure 2 shows the amount of Ki67-positive cells on the slides analyzed. The relative number of Ki67-positive tumor cells was significantly reduced in tumors from mice treated with 5-FU (94.3% inhibition) and piplartine (45.1% inhibition) compared to control tumors (P < 0.05) or tumors treated with piperine. 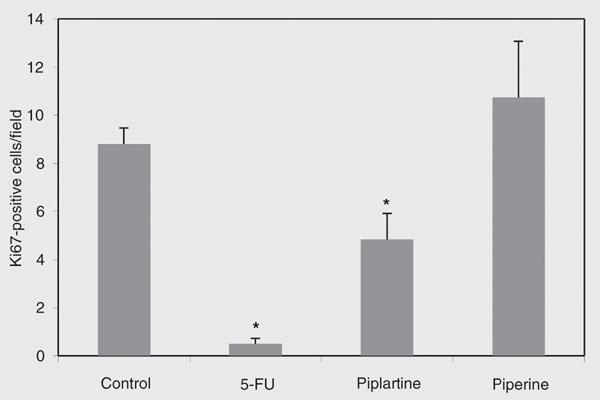 Figure 2. Effect of antitumor substances on the cell proliferation of Sarcoma 180 cells. The mice received 25 mg kg-1 day-1 5-fluorouracil (5-FU) and 100 mg kg-1 day-1 piperine and piplartine for 7 days. Ki67-positive cells from 4-6 fields/tumor were counted. Data are reported as the mean ± SEM number of positive cells/field for 10 mice in each group. *P < 0.05 compared to control (ANOVA followed by the Student-Newman-Keuls test).

Table 1. Effect of piplartine and piperine on Sarcoma 180 tumors transplanted in mice.

According to Sunila and Kuttan[11], the antitumor activity of piperine is related to its immunomodulatory properties, which involve the activation of cellular and humoral immune responses. Piperine also had an inhibitory effect on lung metastases[9], probably due to NF-kß inhibition and proinflammatory cytokine gene expression[10]. In fact, piperine possessed only weak cytotoxic activity[10][11][14], indicating that its antitumor activity is not related to direct antiproliferative effects on tumor cells.

Immunohistochemical staining of cells for proliferation-associated proteins provides information about the tumor proliferation rate. The monoclonal antibody Ki67, described by Gerdes et al.[20], is a mouse monoclonal antibody that identifies a nuclear antigen associated with the G1, S, G2, and M phases. This molecule is expressed along the entire cell cycle, except in G0 and early G1[21]. Thus, the results obtained with Ki67 staining support the notion that piperine activity was not related to a reduction of tumor proliferation rate.

The mechanisms involved in the antitumor activity of piperine have not yet been elucidated. Moreover, its immunostimulant activity still remains controversial, since Dogra et al.[22] demonstrated that piperine at the dose of 4.5 mg/kg had a consistent immunosuppressive effect, suppressing the weight and cell population of the spleen of treated animals. In the present study, we also observed a reduction of spleen weight in piperine-treated animals, but only in animals treated with the 100 mg/kg dose.

The histopathological analyses suggested that the liver is the main affected organ in piperine treatment. Ballooning degeneration of hepatocytes, accompanied by microvesicular steatosis in some areas, was observed in the group treated with piperine, suggesting intrinsic hepatotoxicity, which produces liver damage when the drug is taken in sufficient quantities. However, regeneration of hepatic tissue occurs in many diseases, except in the most deleterious ones. Even when hepatocellular necrosis is present, but connective tissue is preserved, regeneration is almost complete[23][24]. The hepatic alterations observed after piperine treatment could be considered reversible[23][24][25].

Piplartine, on the other hand, is considered to be a strong cytotoxic alkaloid, inhibiting the proliferation of several tumor cell lines in culture[12][13][14]. These data suggest that the presence of two a,ß-unsaturated carbonyl moieties is an important structural requirement for cytotoxic activity[12][13][14].

In fact, the activity profile of piplartine seems to be different from that of piperine. Immunohistochemical results obtained with Ki67 staining showed that the antitumor activity of piplartine is associated with a reduction in the tumor proliferation rate, which is compatible with its antiproliferative effects. Piplartine had no effect on the spleen of treated animals, and apparently has the kidney as the main toxicological target. Moreover, the kidney damage observed in piplartine-treated animals could also be considered reversible[26].

The present data show that both piplartine and piperine possess in vivo antitumor activity related to reversible toxic effects on liver and kidney. Thus, piplartine and piperine may act as antitumor agents, although they seem to act through different pathways and the mechanisms of action responsible for their tumor-reducing activity are not known.

“In vivo growth-inhibition of Sarcoma 180 by piplartine and piperine, two alkaloid amides from Piper”