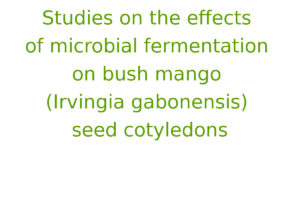 Fermentation is known to improve the nutritional value of food samples. This study was conducted to assess the influence of fermentation on bush mango in order to reduce environmental pollution. Bush mango seed cotyledons were naturally fermented for five days at room temperature.

The bacteria and fungi responsible for the fermentation were isolated and characterised using standard microbiological techniques. The unfermented seeds and fermented residues were analysed for proximate composition, nutrient composition and some antinutrient contents. The bacteria isolated from fermented bush mango seeds were Bacillus cereus, B. subtilis, Aerobacter aerogenes, Staphylococcus epidermidis, Streptococcus faecalis and Clostridium sporogenes. The fungal isolates included Penicillium chrysogenum, Aspergillus flavus, A. niger, Trichoderma viride and Rhizopus stolonifer. The results of the proximate analysis show that there was a decrease in fat content of the fermented seeds (65.30%) compared to unfermented seeds (56.13%) while the crude protein and nitrogen free extract increased from 0.54 to 2.25% and 19.71 to 31.08% respectively. The mineral contents (Mn, K, Fe) were found to be lower while P, Mn and Na were high. There was reduction in the phytate (from 1.40 to 0.67) and oxalate (1.26 to 0.72) contents after fermentation. Fermented bush mango seed cotyledons can be used as highly proteinous and low fat food condiment for soup making as well as animal feeds.

It has been noted that no single group or category of foods or food products are as important as fermented foods and have been relative to man’s nutritional well being throughout the world. Chemical compounds which are end products of fermentation process are tasty to many and are enjoyed by a large number of people of different ethnic groups (Ekundayo and Ojokoh, 2004). Fermentation is one of the oldest biotechnologies used in the enhancement of the nutrient content and preservation of food through the biosynthesis of vitamins, essential amino acids and proteins, by improving protein and fibre digestibility and by degrading antinutritional factors (FAO, 1983). Several food industries utilise microorganisms and the fermentation process in the preparation of foods (Ekundayo and Ojokoh, 2004). Fermentation process tends to reduce the toxicity of some foods for example gari and penjerim which are both from cassava (Namibisan and Sundaresan, 1985). The fermenting organisms include lactic acid bacteria, acetic acid producing bacteria and some alcohol producing yeasts. Certain mould species also play a very important role in some fermented foods (Frazier and Westholf, 1989). Much work has been done on fermentation of the seeds of I. gabonensis, however there is limited report on the fermentation of the cotyledons. The study was therefore aimed at investigating nutrient and chemical composition of liquid substrate fermented bush mango seed cotyledons.

The seeds of I. gabonensis were purchased at Bodija market Ibadan and put in polyethylene bag, which was directly brought to the laboratory for examination. The bush mango (I. gabonensis) seed cotyledons were surface sterilized by dipping in 90% ethyl alcohol for 1 min and rinsed in several changes of sterile distilled water. The seed cotyledons were then allowed to ferment naturally for 5 days.

The filtrates of the fermented seeds were cultured on nutrient agar (Lab M) and potato dextrose agar (Lab M) after serial dilution for bacteria and fungi respectively. Bacterial isolates were identified and characterized based on their colonial morphology, cellular morphology and biochemical characteristics according to the method of Fawole and Oso (1988) while fungal isolates were identified using cultural and morphological features (Barnett and Hunter, 1972).

Moisture content was determined by drying to constant weight at 105°C in an oven, ash by ignition at 55°C in a muffle furnace, oil content by soxhlet extraction with hexane, protein by micro Kjedahl method and crude fibre by Acid/Alkali digestion methods (AOAC, 1990). The mineral were analyzed by dry ashing the sample at 55°C to constants weight and dissolving the ash in volumetric flask using distilled, de-ionized water with 10 ml of 10% hydrochloric acid solution. Sodium and Potassium were determined by using a flame photometer (model 405, corning UK) using NaCl and KCl salts to prepare the standards. All other metals were determined by Atomic absorption spectrophotometer (Perkin-Elmer model 403, Norwalk CT, USA). All chemicals used were of analytical grade. Earlier, the detection limit of the metal had been determined according to Techtron (1975). The optimum analytical grade was 0.1 to 0.5 absorbance unit with a coefficient of variance of variance of (0.87-2.20%) the mineral reported as mg/100 g. Phytate and tannin was determined using AOAC (1990) methods while oxalate content was by the titrimetric method as modified by Akindahunsi and Salawu (2005).

A total of 11 microorganisms were isolated from fermented seed filterate of bush mango seed cotyledons. Six of the above microorganisms were bacteria while the remaining five were fungi. The bacteria isolated were Bacillus cereus, Aerobacter aerogenes, Staphylococcus epidermidis, Streptococcus faecalis, Clostridium sporogenes and Bacillus subtilis. The fungi isolated were Penicillium chrysogenum, Aspergillus flavus, A. niger, Trichoderma viride and Rhizopus stolonifer. 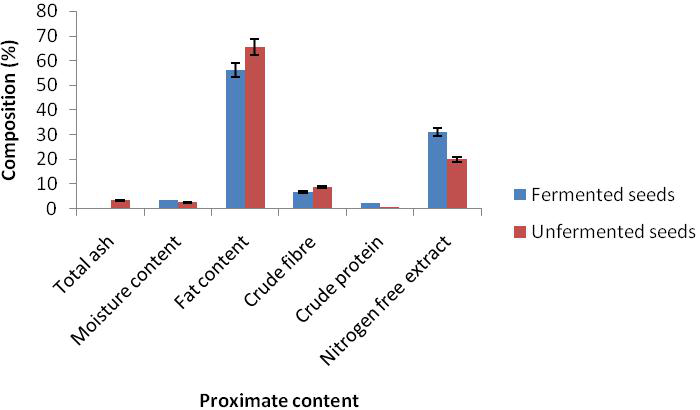 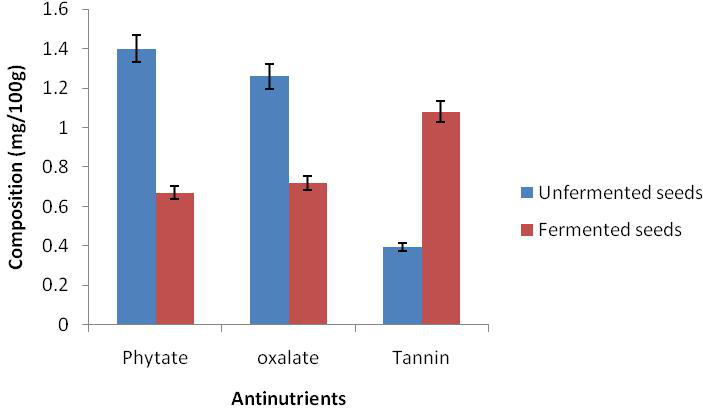 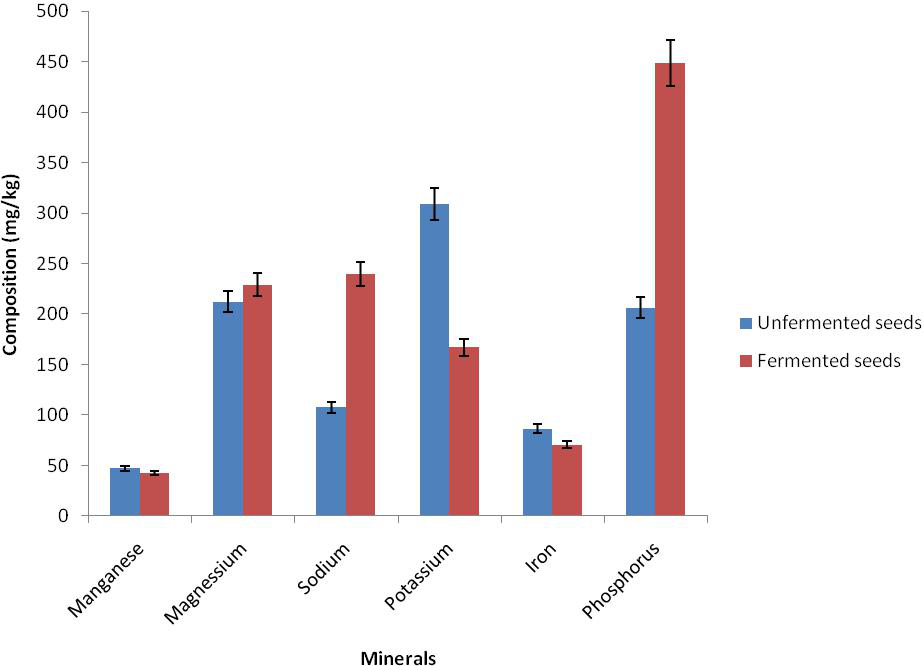 Traditional societies have always exploited edible wild plants to provide adequate nutrition, food security and income generation (Akubugwo and Ugbogu 2007; Akubugwo et al., 2008). The proximate composition of bush mango seed showed that there was reduction after fermentation in ash, fat and crude fibre content while there was increase in dry matter, crude protein and nitrogen free extractives. The increase in the moisture content could be attributed to the addition of water to the sample prior to fermentation as also observed by Ojokoh et al. (2012). Reduction in fat content is advantageous to prevent excess fat in the body. Ekpe et al. (2007) also observed a decrease in the crude fat of I. gabonensis as a result of processing. Since the ash content is a measure of the total amount of minerals present within a food, a reduction in its level during microbial fermentation could be as a result of the minerals being used up by the fermenting organisms as a mineral source during their metabolism (Aderiye and Ogunjobi, 1998).The increase in protein content of the seed is in line with the work of Fadare and Ajaiyeoba (2008). The high protein contents could be attributed to the ability of microorganisms to secret some extra cellular enzymes capable of degrading cellulolytic materials during fermentation (Oseni and Ekperigin, 2007). The increase in protein level could also be attributed to increased microbial nitrogen during fermentation as a result of increased production of single cell proteins (Ekpe et al., 2007).

The antinutrient composition of bush mango seed showed that phytate and oxalate content reduced after fermentation while tannin content increased which is an agreement with the work of Oseni and Ekperigin (2007). A wide range of microflora has been known to possess phytase activity (Ojokoh, 2005) which may be partly responsible for reduction in phytic acid content in the fermenting samples. Perez-Hidalgo et al. (1997) proposed that the formation of resistant starch together with condensed tannin-protein content may be responsible for the increase in tannin content. However, reduction in tannin of fermented products such as Jack beans and African oil bean seed were observed by Odetokun, (2000) and Enujiugha and Akanbi (2005).

The result of nutrient composition showed that magnesium, calcium, sodium and phosphorus increased after fermentation of bush mango seed. However, manganese, potassium and iron content were reduced. The fermented sample was rich in some essential minerals which perform various functions in the body (Akindahunsi et al., 1999).

In conclusion, bush mango seed cotyledons have nutritional benefits which can be enhanced when fermented. Fermentation helps to increase the protein and nitrogen free extractives of the seeds thus improving its nutritional quality. There was also reduction in the fat content, which is of good advantage to the body. It is then recommended that bush mango seed cotyledons be fermented before consumption due to increase nutritional composition after fermentation.